The TRAI has mandated a minimum call ring-time or call duration of 30 seconds for outgoing mobile calls before they are disconnected, and 60 seconds for such calls to landlines, a view that was backed by the older operators Bharti Airtel and Vodafone Idea but opposed by Reliance Jio, which wanted a shorter span of 15-to-20 seconds.

Reliance Jio has accused rivals, including Bharti Airtel and Vodafone Idea, of “illegally” masquerading wire-line numbers as mobile numbers for “undue enrichment” and has urged TRAI to slap “severest penalty” on them for violating regulations and licensing norms

Must Read: Multi Tax Rate under GST in Tally ERP9

The Telecom Regulatory Authority of India (TRAI) has fixed call ring-time at 30 seconds for mobile phones and 60 seconds for landline phones, in case the call is neither answered nor rejected by the subscriber.

Call ring-time: Now, you have 30 seconds to answer a mobile call, 60 seconds for landline 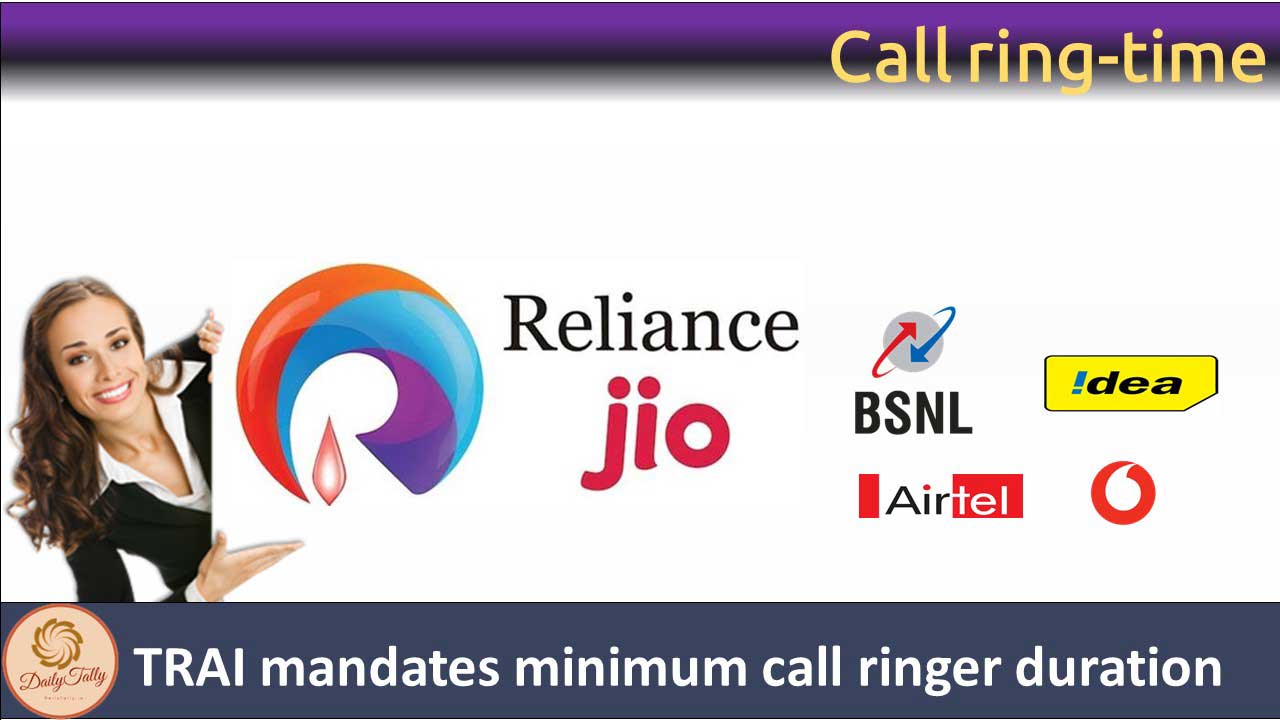 Must Read: How to Register or Link Mobile Number with Aadhaar card

As of now there was no such limit for calls within India. The typical ring time in mobile networks is between 30-45 seconds, while it ranges between 60 and 120 seconds for landline networks.

In September, TRAI had released a consultation paper titled “Duration of Alert for the Called Party” after ongoing fight between Airtel and Reliance Jio over phone call ring time reached the doors of the telecom regulator. The authority had invited industry’s views on the duration of a phone ring before a call gets disconnected.

The objective of this consultation paper was to discover values for duration of ringing which should be configured by all the telecommunication service providers to force release calls in case they are not answered within the given duration, TRAI had said in the consultation paper.

The fight on the call ring-time duration began when Mukesh Ambani-led Reliance Jio shortened the duration of its outgoing calls to 20 seconds, which the operator said is the global standard. But after huge uproar in the sector, especially from the Bharti Airtel, the telco reportedly raised the ringing time to 25 seconds.

Reliance Jio has accused rivals, including Bharti Airtel and Vodafone Idea, of “illegally” masquerading wire-line numbers as mobile numbers for “undue enrichment” and has urged TRAI to slap “severest penalty” on them for violating regulations and licensing norms.

Meanwhile, Bharti Airtel has accused Jio of trying to misguide the regulator ahead of the consultation on call connect charges (also called interconnect usage charges, or IUC). A shortened ring time span meant more missed calls, and therefore greater return calls to the Jio network, enabling the Mukesh Ambani-led telco to cut its net interconnect payouts to the incumbents.